I came across this issue a few times already, so I figured it would be good to share the findings, especially since it took me down the rabbit hole.

First off, the error “Another task is already in progress” is kind of obvious but yet does not provide enough detail. I ran into this trying to upgrade 4 hosts in a cluster via VUM, no tasks were running at the time of the upgrade start. This was initiated from VMware Cloud Foundation. Thinking the issue was with VCF I tried to do a direct upgrade from VUM, skipping VCF… but received the same error. Also tested with/without vSAN. NFS, etc.

The issue appeared to be related to a race condition where both the VUM remediation AND this “other task” were trying to run at the same time on that host. From the task console we can see that there was another “install” operation running as soon as VUM was trying to remediate. The Initiator give me a hint, and we can see vcHms “cut in line” a did an install operation.

I started looking into the esxupdate log (/var/log/esxupdate.log), and noticed that the host was trying to install a vib. But this vib was already installed, so what gives?

The name of the initiator and one of the vibs gave me a clue (vr2c-firewall.vib). I was running vSphere Replication on that particular cluster, so I started digging in. To validate my suspicion, I shutdown the VR appliance and attempted to upgrade one host. The upgrade worked as expected with no errors, so I was pretty certain something within vSphere Replication was causing this.

Within the appliance I looked into the config settings for HMS and discovered that there were 2 vibs that were set to auto install at host reconnect. So it appears there is a race condition when VUM and VR and both trying to do an install task at the same time (at reconnect). Makes perfect sense now.

The ESXI update logs indicated that the vr2c-firewall.vib was the one trying to install. After re-checking the vibs (esxcli software vib list) on all the hosts, I did see this vib was already installed but the task from VR kept trying to install at reconnect.

As I workaround, I decided to disable the auto install of this particular vib by running the following command within the /opt/vmware/hms/bin directory and then restart the hms service:

This workaround worked as a charm and I was able to upgrade the rest of the cluster using VUM. I did not find an official KB about this, and this is by no means an official workaround/fix.

Disclaimer: If you plan to implement this fix, be aware that this is not an official VMware blog, and changes to products may or may not cause issues and/or affect support.

I was in the process of deploying vSAN Performance Monitor  and came across an error.

It further describes the error as “vmwarePhoton64Guest’ is not supported”

Select yes for the upgrade. Warning: This step is NOT reversible.

On April 17, 2018, VMware released vSphere 6.7. This includes vCenter, ESXi, and of course vSAN. A lot of people are looking to upgrade in order to take advantage of the new features, and enhancements; primarily the H5 client… good bye flash client! Links to more info on what’s new for vSphere and vSAN.

From an HMTL 5 client perspective, the feature parity is about 95%. For vSAN alone, it is about 99%, as we are only missing Configuration Assist, which is still available via the flash client.

I see a lot of people getting confused, and still believe that vSAN is a separate upgrade, just like traditional storage. Fortunately, vSAN is in the kernel, so once you upgrade ESXi you have also upgraded vSAN. Boom!!! Even though the version numbers may not be exact between ESXi and vSAN, they still go hand-in-hand. With that, it is important to understand the steps necessary for a vSAN upgrade.

Based on the nature of vSAN, we need to follow the vSphere upgrade path. This includes checking the VMware Product Interoperability Matrices, not only with your current versions against the versions you are going to upgrade to, but also all the other VMware products such as NSX, SRM, vROps, etc.

As previously discussed, you will need to check the Product Interoperability Matrix to make sure all your products can run on vSphere 6.7. Don’t shoot from the hip, and start upgrading before you have done proper research.

I mentioned the choice of migrating hosts to a new vCenter. This is something I do quite often in my labs, and it is a simple process.

The wait is over (almost). Since the introduction of vSphere Web Client, many admins have slowed down the adoption of the Web Client as well as updates to vSphere due to the performance of said client.

VMware has released a couple of flings in relation to this problem. One of them was the host web client, where you can manage your hosts directly without the need to install the vSphere client. This fling is now part of the latest update to vSphere 6.0 U2. A few days ago, VMware released a similar option for vCenter. Both of these options are based on HTML 5 and javascript.

Like I mentioned before, starting with vSphere 6.0 U2, the host web client is already embedded into vSphere. If you do not have this update you can still download the OVA and access the host web client that way. Currently it only works if you have vSphere 6.0+ but once version 5.5 U3 is released, it will also work with that version. Here is a link to download the fling.

To access the web client, you will need to add “/ui” at the end of the name/ip address of your host. For example https://<host-name-or-IP>/ui

The client is very responsive and has a nice UI. Not all the features are currently supported, but more will be coming at some point in the near future.

This HTML web client is only available as a fling at the moment. You will need to deploy an OVA and register the appliance with the vCenter that you would like to manage. Being a fling, not all features are included. It basically focuses on VM management, but I am sure they are working to port all the features over at some point (I hope).

To deploy this ova, you will need to enable SSH and Bash Shell on your VCSA. You can do both from the VCSA web UI. If you are running Windows based vCenter refer to the Fling documentation here. 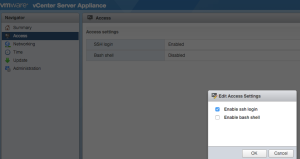 Prior to going through the configuration you will need to 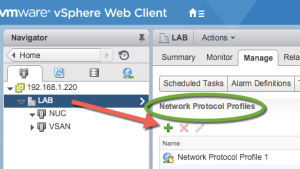 After deploying the OVA, creating an IP Pool, and enabling both SSH and Bash Shell on VCSA, it is time to configure the appliance.

The HTML Web Client is pretty awesome, I gotta say, even if not all the features are there yet. It is super clean, and responsive. I can’t wait for it to be embedded with a full feature set. 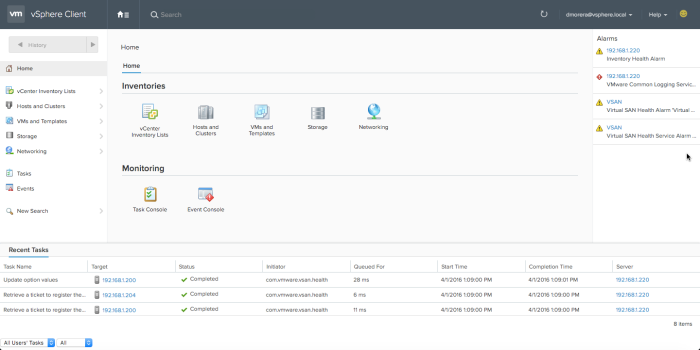 Installing VMware vSphere on hardware come with many options when it comes to the location of the many partitions necessary for ESXi. ESXi can be installed on USB, SD (mini) cards, local storage, and boot from LUNs. Before you deploy your ESXi hosts, you should be thinking about your design and the limitations (is any) of each of the boot options.

Remember that ESXi has several partitions that are created during its installation.

One thing to note is that partition 2 & 3 (/scratch & VMFS) are not present on the image below. This is because my ESXi host was installed on an SD card.

This post will focus on the vmkDiagnostics partition. VMware recommends that this partition is kept on local storage unless it is a diskless installation, such as boot from SAN. I have seen a rapid increase on boot from SAN as more and more people are transitioning into Cisco’s UCS blades. So, if you are doing this or planning on booting from SAN, make sure that you create a core dump partition for your hosts. You have a few options to do this.

That sounds pretty easy right?!? Yes but wait, there is a big caveat here.

You CANNOT place the diagnostic partition on any of the options above if using software iSCSI or hardware dependent initiators (iBFT). This can only be done via independent hardware iSCSI. More info here. This is not version dependent at the time this post was written.

If do not have any hardware HBAs, you have a couple of options.

© GreatWhiteTec, 2014-2021. Unauthorized use and/or duplication of this material without express and written permission from this site’s author and/or owner is strictly prohibited. Excerpts and links may be used, provided that full and clear credit is given to Dave Morera and GreatWhiteTec with appropriate and specific direction to the original content.